What Makes Goa a Fun Destination

There is a lot more to than beaches, sunbathing and its nightlife. The gentle swaying of palm trees, the fun and loving people, and the relaxed vibe of makes it a fun holiday destination for all.

With the blue stretching along the entire state’s coastline, a swim or a stroll along its beaches is the most enjoyed activity by both locals and tourists. is also a hub for many water sports activities like scuba diving, banana ride, water scooter rides, etc; enough to give you a feel of freedom.

Apart from its sandy beaches, the state also has many wildlife sanctuaries, waterfalls, and rivers to immerse yourself in nature. Its monumental churches, temples, and mosques are an architectural masterpiece. is also known for many historical forts where you can enjoy panoramic views along with sunrise and sunset.  has something for everyone for sure! No wonder why it attracts a lot of tourists every year.

Here are all the things that make a Fun Destination for a holiday trip:

For best accommodations at affordable prices in South Goa call Vilanova Holidays on +91 8975840599.
Posted by Unknown at 12:46 AM No comments: 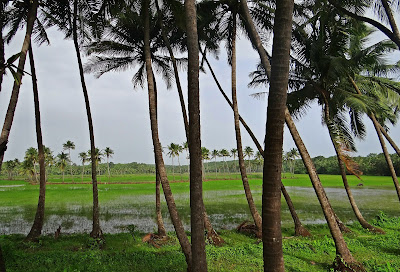 Apart from the beautiful and golden beaches we usually hear of, there's a lot more to explore in South Goa. Visitors can have an unforgettable experience by visiting South Goa's glorious temples, ancient churches, picturesque waterfalls, wildlife sanctuaries, and majestic forts. Below are places that truly make South Goa all the more interesting, making it a hot favourite among tourists.


As mentioned earlier, the beauty of South Goa goes beyond its heavenly beaches. This you'll realize when you take a trip to the second largest wildlife sanctuary in Goa - Cotigao Wildlife Sanctuary. It is covered in abundant lush green flora.
The sanctuary is also home to various species of animals and birds. To make the most of your time here, you can indulge in activities like bird watching, a trek along the green paths of the forests, interact with the locals and capture beautiful shots in daylight.


One of the oldest colossal forts in Goa, Cabo de Rama is named in honour of Lord Rama. This fort has been invaded by several rulers in the past and witnessed some of the most important battles in Indian history.
Although this architectural masterpiece now lies in ruins, you can get a glimpse of its majestic defence, from several bastions, turrets, rusty cannons to a moat, prison and military barracks. Cabo de Rama fort also houses a small chapel which is still in use. From the top of the fort, you can enjoy a mesmerizing panorama of the Arabian Sea and its coastline.


One of the five tallest waterfalls in India, Dudhsagar falls is a sight to behold. It is situated inside Bhagwan Mahavir Sanctuary and appears to be a heavy stream of overflowing milk. Cascading straight down from a height of 310 metres, this spectacular waterfall reminds you of nature's incredible power and beauty.
The waterfall pounding the rocks, the dense greenery on all sides, the chill breeze, and its roaring sound, all make this a major place of interest in South Goa. Hiking through the thick jungle, grey tunnels and railway tracks is the ultimate way to relish the waterfalls.


One of the finest places in South Goa to enjoy abundant nature and diverse wildlife is the Netravali Wildlife Sanctuary. It makes a perfect getaway for nature enthusiasts. The sanctuary is rich in dense tropical forests and high range of mountains. With its rich habitat, this sanctuary is home to Gaur, Malabar giant squirrel, leopard, black panther, great pied hornbill, grey-headed bulbul and several other animals and birds. You can also enjoy the relaxing sounds of the Saveri waterfall in this green haven while in South Goa.


Built in the 12th century and one of Goa's most ancient temples is Tamdi Surla temple which is dedicated to Lord Shiva. Away from civilization and amidst dense forestation, this temple in South Goa is a truly divine place. This beautifully sculpted black basalt temple has intricate carvings in the interiors. The temple is still active and every year local villagers come together to celebrate the festival of Mahashivratri with love and devotion.


Yet another favourite among nature and wildlife lovers, Bhagwan Mahavir National Park is the biggest wildlife reserve in Goa and a lovely place to visit in South Goa.
It is located on the slopes of the Western Ghats, covered in dense evergreen tropical and deciduous forest. Many of the animals including Gaur, Sambar, Leopards, Elephants, Spotted Deer, Slender Toris, Jungle Cats, Malayan Giant Squirrels, and reptiles like Pythons and Cobras are sheltered in this park. Adding to the feature of this vast sanctuary are the spectacular Dudhsagar falls, Devil's Canyon and the medieval temple Tambdi Surla.


Situated at Cuelim hill, Three Kings Chapel offers a stunning vista of the lush green fields and the deep blue ocean. Though it's a steep ride/drive to this church, the panoramic view from the top is well worth it. A visit early mornings or evenings is truly enjoyable. Urban legend has it; this church is haunted by the ghosts of 3 kings. Despite this, many tourists flock to this beautiful chapel making it a popular tourist spot in South Goa.

So make a trip to South Goa and don't forget to head to these wonderful places. For best accommodation at unbeatable prices, contact Vilanova Holidays on +91 8975840599.
Posted by Unknown at 12:37 AM 13 comments: